Birder’s Notebook by Bob Andrini: On the Kane County Audubon Checklist, the red-necked phalarope is listed as RARE in both Spring and Fall. We might get lucky to see one during migration, but to see 3 in the same pond is a joy to behold. Pictured here is a female in spring plumage.

The scientific name for the red-necked phalarope is Phalaropus lobatus: Phalaropus comes from the Greek meaning ‘coot foot’ (in reference to their lobes toes like those of a coot) and lobatus, also from the Greek meaning lobe of the ear (again in reference to their toes). Reverse sexual dimorphism is shown in these birds as the female is the more brightly colored of the species.

The summer and winter plumage of these birds is quite different as you will see in the pictures below. One of the behaviors that people enjoy is watching them feed – they spin around like a top – round and round. They are creating a ‘tornado’ of water that draws invertebrates to the surface where they can eat them.

Winter field marks for the red-necked phalarope include: thin black bill, white underparts and dark broad band from eye to ear – the spring plumage the female includes having a chestnut brown stripe on neck with white throat. 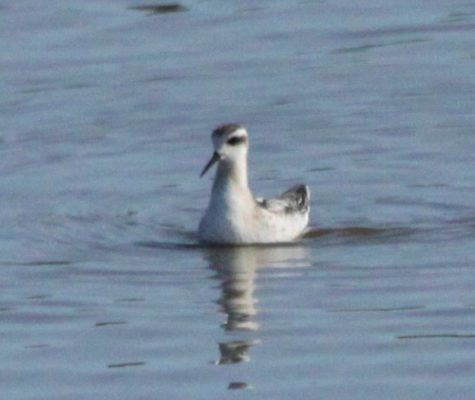