Birder’s Notebook by Bob Andrini: To find this wren, you must go to a weedy field usually near a marsh. The scientific name for the sedge wren is Cistothorus platensis. Cistothorus comes from the Greek meaning rushing/leaping (in reference to its movements around a common perch) and platensis for the Spanish territory of Rio de la Plata, where the type specimen was collected. The common name (sedge) is from sedges where they are usually found.

The male will build many nests once on territory, and the female will choose the one to nest in. These ‘dummy’ nests may be used as dormitories later in the season.

Some of the field marks of the sedge wren are: faint eye-brow, streaked back and bicolored bill. They have a typical wren like rattle call that sounds somewhat like a sewing machine (as I said before, to be a birder, you must have an imagination). 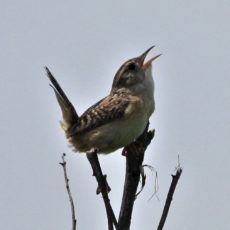